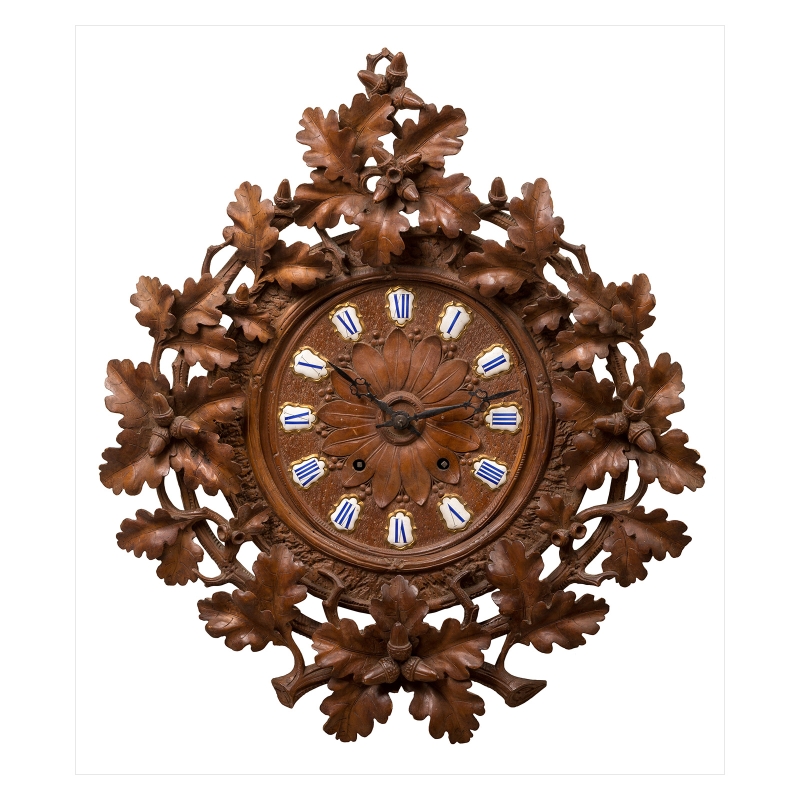 Clocks featuring "Black Forest" carvings of detailed woodland and hunting scenes were created by highly skilled craftsmen in Germany and Switzerland for much of the late 1800s. Immediately recognizable, this style is most often associated with the "cuckoo clocks" that have become a Bavarian cultural icon. Though not a true "cuckoo," as it has no little bird or pitched roof top, this impressive wall clock with its intricately carved wreath of oak branches, leaves and acorns is less of the Black Forest cliché and more generally rustic and decorative.

The clock face features a carved central floral rosette encircled by Roman numerals painted on raise enamel cartouches bordered in metal. There are two winding keyholes, one for the clock spring and one for the chime. The original key is included.

Though the ornamental elements of the clock are Swiss / German, the interior clockwork is a French-made Morez movement, spring driven and utilizing a small decorative pendulum, which is included. The clock will chime the hours, and also on the half hour. The mechanism was recently serviced by Relojería Losada, the most respected clock makers in Madrid, Spain. The clock is functioning perfectly, and a detailed condition report from Losada will be included with purchase.