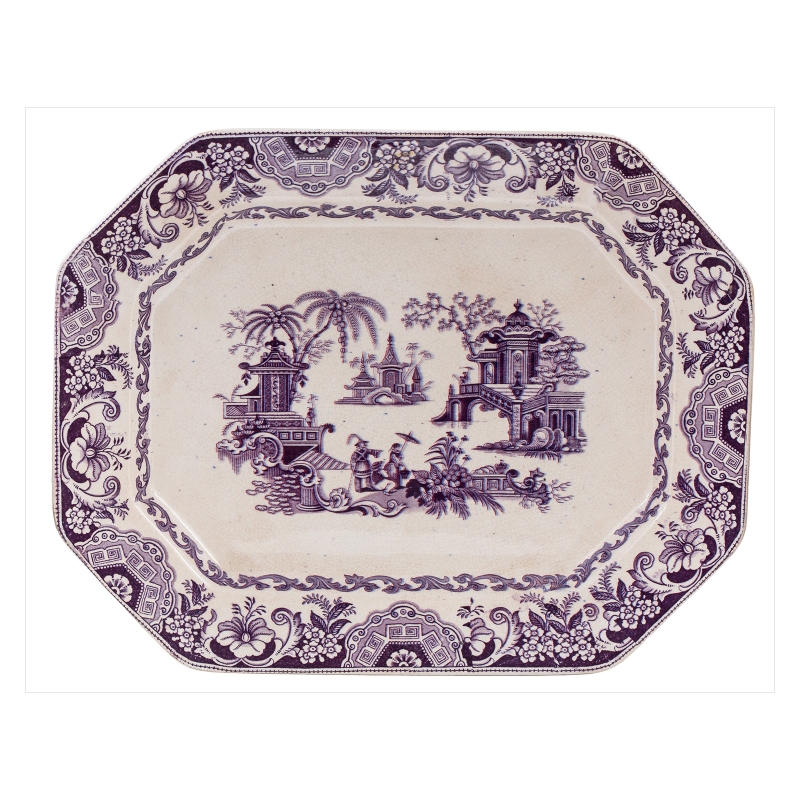 The origin of Sargadelos Ceramics goes back to the early 19th century in Spain's northern province of Galicia. Industrialist Antonio Raimundo Ibáñez had already established a thriving metalworks foundry in the rural Santiago de Sargadelos parish, when in 1806 he expanded his business into chinaware manufacturing when conflicts with Great Britain ceased the importation of the popular, bright white “Bristol porcelain” into Spain. With his ironworks factory infrastructure, abundant local water supply and, most importantly, the excellent quality of fine kaolin clay deposits found near Sargadelos, Ibáñez created a company that would be producing 20,000 pieces of chinaware a year by the early 1830s.

Based on its backstamp, this large octagonal serving plate dates to what is referred to as the Cuarta Época, or fourth period, of Sargadelos production, years 1870-1875. The chinoiserie image with its pseudo-Asian motifs is a copy or adaptation of similar English porcelain designs, which are in turn originally inspired by porcelain pieces exported from Asia. The vivid blue/violet image was produced by a process developed by the English in the 1750s called Transfer printing, in which a monochrome print on paper is taken from an engraved metal plate, and the image is transferred by pressing this paper print onto the ceramic piece before glazing and firing. The resultant ceramic is called Transferware.