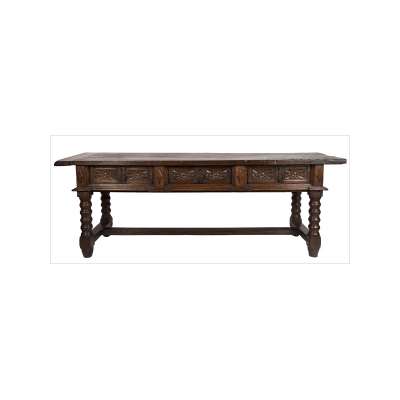 The long and relatively narrow refectory table was originally used in the dining halls (refectories) of Medieval monasteries and convents. The style was adapted for use in castles and aristocratic homes as banquet tables to seat many guests. This fine example dates to the 1600s, and is in nice shape considering its age, and exhibits some nicely hand-carved detailing. The tabletop is a single plank, with a few areas of period repair work known as “chuletas.” This is where a damaged part of the wood would be cut away, and replaced by another piece of wood cut to size. In Spanish a “chuleta” refers to a small cutlet of meat or a pork chop, and seems to be is referring to the “cutlet” of wood used in making the repair. The table has three drawers accessible from one side, and the locks are functional and the key is included. A dramatic and impressive piece of history.