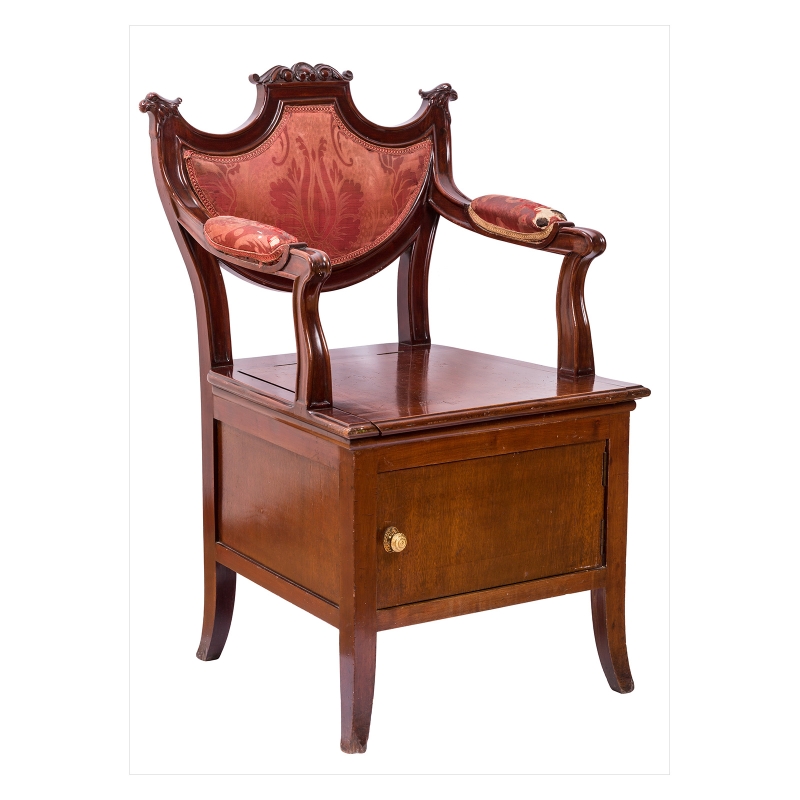 This late 19th century French Napoleon III (or Second Empire) style "throne" is a fine example of elegant furniture making meeting functional necessity. Known as a "Chaise Percée" or "pierced chair" this type of furniture traces its history back to the "close stool" of the Middle Ages, when chamber pots were concealed in small stools or commodes with a hinged lid. Until the advent of widespread indoor plumbing at the beginning of 20th century, furniture of this type was found in most every household, where economic level would dictate extravagance of design. This chair, with its luxurious mahogany wood and damask fabric, as well as regal Second Empire design motifs allude to an upper class or aristocratic home. The only hint to its dual use is the small front door enclosing the chamber pot compartment. (chamber pot not included).

The only stamps or marks on this piece appear on the door latch hardware, identifying the French firm Vachette Frères as the maker. This company was supplying locks and latches to the most important of Parisian cabinetmakers during the latter part of the 19th century, corroborating the time period and place of manufacture for the furniture. The chair is in fine general condition, and structurally solid. There are wear marks and scratches on the wood, and both upholstered pads on the arm rests are worn and in need of repair.